She wears a cape, and her superpower is opening our eyes. #LizKineke 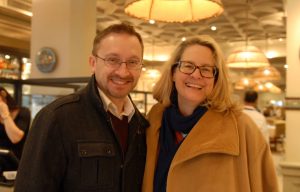 Journalist @Liz Kineke wears a cape, and her superpower is opening our eyes.

If she wore a hard hat, she would operate a boom crane from which a heavy steel wrecking ball was suspended. Instead, as Producer of the Religion and Culture Series at CBS News, Liz uses the tools of her trade to bust down the walls of ignorance. https://www.cbsnews.com/religion-and-culture/

I first met Liz in 2014 when she and former Assistant Producer @Natalie Baxter http://www.nataliebaxter.com traveled to South Bend to film portions of “Crime, Punishment and Redemption” https://www.cbsnews.com/video/crime-punishment-redemption/. The work that came out of Liz’s visit resulted in CBS capturing the prestigious 2015 Wilbur Award for television and cable documentary. http://www.religioncommunicators.org/cbs-leads-list-of-2015-wilbur-award-winners

The thing is, every segment of CBS Religion and Culture is extraordinary because they inform and educate at the same time as they engage and challenge. Tough questions are tackled, questions like “Who are we as a nation?” and “What does life after hate look like?” https://www.cbs.com/shows/cbs_evening_news/video/skHVVs6_Tfs3J4fIpL9q2F4z03MBFc7Y/beyond-tolerance/.

Liz allows fieldworkers who position themselves out on the frontlines where faith and culture clash to tell their stories. People like Sister Joan Chittester, who, after having spent her life fighting for women’s equality, simply says, “I’m looking for the God of love.” People like Reverend Joan Brown Campbell who, in 1965, invited Dr. Martin Luther King, Jr. to speak at Shaker Heights Christian Church. When the majority of the congregation objected to the idea that a black man would speak from the pulpit, Rev. Campbell found another way. Standing on the steps outside, Dr. King was able to address a much larger crowd of 3,000. Says Campbell, “I lived through history, and I was part of it.” https://www.cbsnews.com/video/the-wisdom-of-our-elders/

I was able to “meet” Karen Armstrong, one of the world’s foremost thinkers on comparative religion and learn about another favorite author, Thomas Merton, in the don’t-miss Modern Masters of Religion segment.  https://www.cbsnews.com/video/modern-masters-of-religion/

Liz crafts documentaries that grapple with difficult issues regarding race, religion, and culture. She is a journalist who refuses to be a gatekeeper. Instead, she pushes open gates, climbs over fences, does whatever it takes so that she can explore what is on the other side. Then, as if she were tilling the very conscience of our nation, her work turns up unseen, buried, neglected, or ignored ideas.

Professor of the Classics at Harvard University Richard F. Thomas explores the ways and means by which we are connected to ancient civilizations in his book Why Bob Dylan Matters https://www.harpercollins.com/9780062685735/why-bob-dylan-matters. Most people, submerged as they are in the here and now, do not recognize that the times they are a changin’. Dylan, quoted in a 2012 Rolling Stone interview. https://www.rollingstone.com/music/news/bob-dylan-unleashed-a-wild-ride-on-his-new-lp-and-striking-back-at-critics-20120927, explains:

The thing about it is that there is the old and the new,
and you have to connect with them both. The old goes
out and the new comes in, but there is no sharp borderline.
The old is still happening while the new enters the scene,
sometimes unnoticed. The new is overlapping at the same
time the old is weakening its hold. It goes on and on like that.
Forever through the centuries.

Liz is our designated Noticer. She has her eye on the foggy, borderless transition from winter to spring, as the crocuses of change do the slow, steady work of pushing up, up, up, striving always to emerge from the darkness of ugly old injustices. Thus, CBS Religion and Culture provides a record—field notes, if you will—of a grassroots stirring. Through Liz, America is able to hear voices of good-hearted people who, having had enough of hatred, bigotry, and injustice, are doing something about it. Fifty years after the assassination of Rev. Martin Luther King, these kinds of profiles in courage are arguably more vital, essential, and necessary than ever before.

Liz as a superhero. She wears the cape of journalism. Her superpower is opening our eyes.

She’s my kind of woman.

Thank you @bobdylan for spending 559 minutes with me this year on @Spotify. You are my #1. #SpotifyWrapped https://open.spotify.com/artist/74ASZWbe4lXaubB36ztrGX

BREAKING: Donald Trump Jr’s big conservative event in Missouri is cancelled after JPMorgan Chase refuses to let them use their payment processing system because they don’t want it used for “hate, violence, or racial intolerance.” RT TO RUB IT IN HIS FACE!

BREAKING: The FBI has RAIDED the home of Lauren Boebert's former campaign manager to investigate whether the associate took part in an election security breach involving voting machines.

How does that make you feel?

Passive-aggressive behavior abounds in workplaces. Here are some of the most common offenders. https://www.huffpost.com/entry/passive-aggressive-phrases-people-say-at-work_l_616462c1e4b019644427d691?utm_campaign=share_twitter&ncid=engmodushpmg00000004 # via @HuffPostLife