At 7:26 p.m. one Monday in January 1987, my obstetrician placed my newborn daughter in my arms. Eager to see this little person who hiccupped every night from 11:00 to midnight, I leaned forward to drink in the sight of my winter rose. I gasped. I had never seen eyes more beautiful. My first thought was I could drown in these eyes.

She gazed at me with perfect equanimity. Calm, self-possessed, and startlingly accepting, she seemed to be communicating that she had arrived so that she could reassure and guide me. I had a sensation of falling, falling, falling, and I sensed that I was falling into her wisdom.

I was very deliberate about naming her in honor of three special men. I named her Julianne for my husband’s best friend, his grandfather, the late Julius Hyman; Erica after her father, my husband and high school sweetheart, Eric; and her initials were those of my late father-in-law, Jack Edgar Zagrans. Jack was a magnificent, kind, movie-star-handsome man who had worked hard in his brief life to make things better for others. Green Acres Orphanage in Oberlin; Murray Ridge School for Retarded in Elyria; Lorain County Community College; and a new Lorain County Jail are some of the projects that he helped make happen.

This is the poem I wrote to announce Juli’s birth. There are references to our family history embedded in the stanzas, such as the mention of the two brothers I still mourned (shining star beams) and the song my husband and I considered to be ours (“The Long and Winding Road”). Even so, although this poem gives a nod to the past, its primary focus is on a bright and happy future. 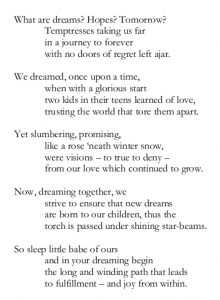 The Most Mendacious President in U.S. History https://t.co/YsHxreLkV0 via @NewYorker

Finally: fact check warnings. #Twitter, you oughta put an F in red on all the #FakeFacts, just like a teacher would do. #FactsMatter https://t.co/sRsEmJGQD1

Reply on TwitterRetweet on TwitterLike on TwitterTwitter
Load More...